Is Michael Dell Still The Right Man For The Job? 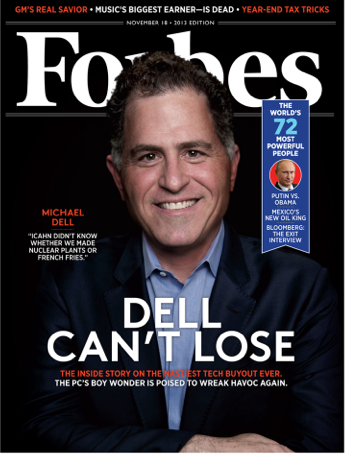 We are very excited to have been quoted in Forbes Magazine in support of Michael Dell taking Dell private.

Why is Michael Dell still the right man to lead the company? After all, he’d already spent more than fives years working on a turnaround before deciding the costly, messy transformation of his eponymous PC maker into an enterprise solutions provider could only succeed outside the public eye.

Customers and partners say he’s the only man who can pull it off — assuming, of course, it can be pulled off.

“People are focusing on the reasons he shouldn’t be the guy,” says Aneel Bhusri, co-CEO of Workday , maker of Internet-based software delivered over the cloud. “But he knows the business, he knows the industry. He’s really looking at it with a clean sheet of paper. It’s hard for me to see any turnaround artist coming from the outside having a better chance of success.”

After a 15-month process that included a nasty public spat with billionaire investor Carl Icahn, Michael Dell — along with buyout firm Silver Lake Asset Management — completed their $25 billion takeover of Dell yesterday. The Round Rock, Texas-based company, which went public in 1988 when Dell was only 23 years , is now private. Dell, who founded the company, controls a 75 percent stake. But the process of going private was easy compared to what’s ahead. Dell and his team of executives now have to convince customers to buy higher-margin services, software, storage, security, and networking gear. The prize: a bigger slice of the $3 trillion market for IT solutions, of which Dell has a 2 percent marketshare today. Complicating Dell’s efforts is the fact that PCs still account for 60 percent of revenue. The company will have to be even more aggressive about promoting and pricing desktops and notebooks because those products attract new buyers — who, in turn, may buy those more profitable products and services.

“If you go talk to customers, they will tell you that the vision Michael has laid out in front of them is the right vision,” says Jeff Clarke, head of the PC business at Dell. “Could you argue that we should have started sooner? Sure. But it’s absolutely his vision and those [customers] are pretty important validations that he’s the right leader, one with the right insights.”

It turns out, that’s exactly what some Dell customers are saying. Shaygan Kheradpir, chief technology officer of Barclays, says he’s confident Michael Dell can reinvent the complex and costly IT technology market the same way he disrupted the PC industry when he sold computers direct for less. “Michael is a builder of companies. He’s a builder of capabilities. Based on his track record, this isn’t a man who you bet against,” Kheradpir says. “Having said that, these are hard right turns — and results will speak for themselves.”

Tenet Healthcare CEO Trevor Fetter had “mixed emotions” when he heard about the leveraged buyout because such deals sometimes mean R&D will be cut or parts of the business sold off. Tenet’s single largest expense is the check written each year to Dell for services and technology. “What mitigated those concerns was Dell buying the business,” Fetter says. “I believe he’s doing this to build a better, more integrated company.”

One thing that probably won’t change at Dell is its CEO’s willingness to talk with anyone about the business. Corning CEO Wendell Weeks says he was surprised Dell took his call “out of the blue” four years ago when he proposed forming closer ties between the two companies. They’re now working together on products, from new notebook PCs sporting the Gorilla Glass used in the iPhone, to exploring whether Corning’s antimicrobrial coatings might appeal to Dell’s healthcare customers. He looks at every problem through the “customer sieve,” Weeks said. “If he thinks you can do something differentiated for customers, he’s always interested.”

Bhusri recounts his first meeting with Michael Dell at an Allen & Co. conference in Sun Valley two years ago. Bhusri told him that Workday had spent $20 million and built its entire data center around Dell’s products. “Later that night I got an email from him asking to have breakfast because he wanted to learn more about Workday,” Bhusri says. “These larger-than-life guys like Michael Dell don’t have to have breakfast with someone like me, but he was very curious.” The conversations led to Dell taking an early stake in Workday, which went public last year.

[highlight type=”one”]Bob Venero, CEO of solutions provider Future Tech Enterprises Inc., says he was one of the first to call Michael Dell when the company announced in 2008 that it wanted to work with channel partners rather than solely selling direct. “I called up to see if my competition maybe could be my friend,” Venero says. Michael Dell not only took his call, he then booked a flight to New York to spend time at FTEI. Five years later, FTEI has sold about $100 million worth of Dell products. Why does he think Michael Dell is the right man to keep leading the company? Venero points to Dell’s ability to adapt. “Think of the culture, the size, and the mindset of that organization, which was direct, direct, direct. Now 35 percent of their revenue goes through the channel…I credit that to who he is at heart —an entrepreneur.”[/highlight]

“We would not want anyone else other than Michael to run Dell,” adds Egon Durban of Silver Lake. “He’s a true visionary who has created and executed two massive innovations in his career – one around the supply chain, and the other around the business model. Only a handful of CEOs have one business accomplishment that puts them at this level. Michael already has two.”

Steve Luczo, CEO of disk driver maker Seagate Technologies, knows better than most CEOs the challenges Dell faced and why it decided to go private. After its IPO in 1989, Seagate was taken private in 2000 by a buyout group that included Silver Lake, Texas Pacific Group and the company’s management. Seagate returned to the public markets in 2002, and Luczo became CEO in 2009 — with Dell as one of Seagate’s biggest customers.

“Michael’s right to say: ‘If I’m making a transformative investment that will take a few years to play out, I shouldn’t be distracted by share prices that are disconnected from the realities of the business,’” Luczo says. “There’s hardly a better person to do it. He’s one of the 10 or 15 people who have been at the heart of the technology industry since the 1980s. And the advantage he has is that he’s seen the show before.”