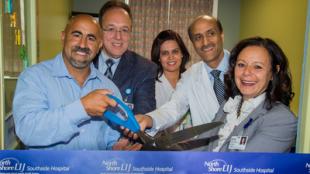 BAY SHORE, NY – Children at Southside Hospital’s inpatient pediatric unit can take an entertainment break thanks to generous donation from FutureTech Enterprise, which contributed an array of new technology in the pediatric playroom.

“It’s important for children who are in the hospital to have a chance to just be kids,” said Barry Goldberg, MD, chief of pediatric cardiology, at Southside Hospital.

Sunil Sood, MD, chairman of pediatrics at Southside Hospital, added that having this break from being focused on medical treatments has helped children to heal more quickly and have a better prognosis.

Southside Hospital’s pediatric department features physicians and other medical personnel who specialize in various aspects of pediatric care. In addition to the services at the Southside, the hospital is affiliated with Cohen Children’s Medical Center in New Hyde Park, so children who require additional services can be transferred quickly to receive that care.

“We are proud to serve some of the youngest members of our community with this pediatric program and can leverage the strength of being part of the North Shore-LIJ Health System to ensure that our patients receive the care that they need,” said Donna Moravick, NP, executive director of Southside Hospital.

Since joining Future Tech in 2021, Graham has leveraged his decades of technology experience to provide strategic counsel and sales support for Future Tech customers operating in the broader APAC region. Graham has a proven track record of
successfully guiding local, national, and multinational clients with their technology strategies and execution.