This digital audiovisual device has been finalized simultaneously and sustainably, for two pediatric hospitals between France and the USA: Hospital Necker Sick Children in Paris and the Johns Hopkins Children Center in Baltimore, Maryland.

It is an interactive installation in a reception – waiting area of the hospitals. It also offers an app for tablets designed for children bedridden in the rooms.

The visual and sound contents are generated using algorithms that interact with the behavior of the spectators.
Several modes of expression and communication are thus proposed:
– Body interaction (the shape of the silhouette is reconstructed on the screen with hundreds of stars)
– Gestural interactions (hand movements create melodic and visual lines, bringing both hands, a ball of energy that can be manipulated is created)
– Face interaction (when opening the mouth, children’s choirs are heard and hundreds of stars are issued)

When no one is in front of the installation, the drawings on the tablets by bedridden children are displayed on the main screen. These musical designs can also be exchanged between the two hospitals to create a communication between children of Johns Hopkins Children Center Baltimore and Necker Enfants Malades Hospital in Paris.

“This visual and sound work involves the spectator -patient’s creative intervention, as the final stage of its expression. Users are both developers, directors and actors of a musical show, visual and luminous, each time unique. ” 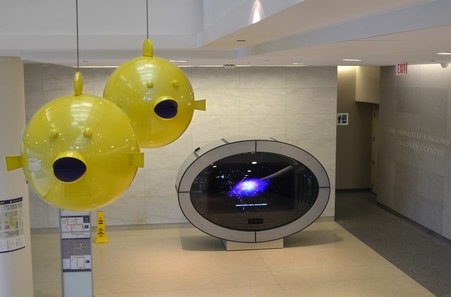 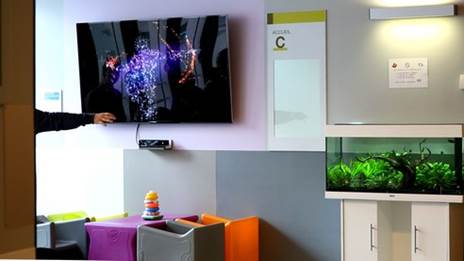